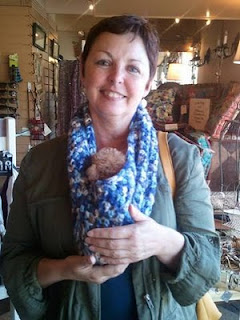 That's tea cup poodle speak for "holy moley, it's cold in Minnesota!" and Saturday it was chilly and windy, but still beautiful!

I don't know about you, but I can't pass up a brand new puppy.  You see it and you just HAVE to pet it, right?  Well, a lovely lady named Sue (on the right) was walking past me on the sidewalk and I saw her little pup just snuggled up near her neck.  Of course I asked to hold it.  Turns out it's a boy, but he was nameless since she had just adopted him two hours before.

I was wearing a cowl I made and he just tried to climb right in...  Ok, I admit, I'm a softie and it was so freakin' cute that it brought tears to my eyes.  *sniffle*  He's just so cute!  Well, I took it off and told Sue that it was hers.... Just so she could snuggle her baby boy up!

Look how sweet he is!  Just a little doll!  I just couldn't stand for him to be chilly, so I feel like I helped someone/something out that day.  Made me feel good about myself.... It was small, but it was something, right? 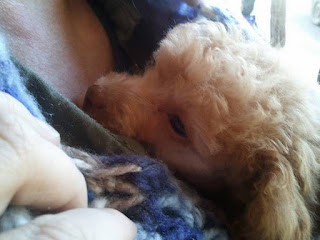 I'm thinking I don't do enough good deeds in a day, so that's a new goal... To try and make someone else's life better every day.