You know, I spent most of my 20's trying to become the person I am now.  I'm still in my 20's at a whopping 29, but I finally feel like I'm where and who I need to be.  I'm happy with my life, my love, work, playtime... And I wish everyone the same happiness.  The struggle to get here just makes the arrival all that much better.

I'm listing new items on Etsy right now and boiling a chicken for soup or chili or whatever I want it to be...  And listening to music.  Just thought I'd share a song that reminds me to not hurry and to enjoy life!

I hope you have an amazing day and enjoy the ride.
xoxo
Jenny Bunny
------------
Etsy Facebook Twitter
No comments:

I figure, since I'm a food addict, that'll I probably just start posting some of my recipes. People ask me for them, so I shall oblige.

I love pizza, whether it's breakfast with egg, dessert with apple, or spicy or supreme or meaty... I'll just eat pizza any way I can get it. I'm cheap though too, so I hate to spend a bunch of money on something I can make at home for next to nothing.

Here's everything I used (minus the cheese as it was hiding in the fridge): 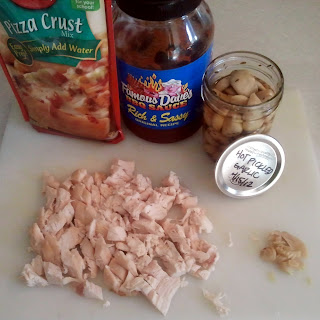 Pizza Dough: I've really been trying to make everything from scratch, since it is so much cheaper overall.  It just takes time.  For now, I'm using store bought pizza crust.  Whichever brand you prefer, just follow the directions about what the temp should be!  This package, for us, since we like thin crust, makes two pizzas!

Sauce: Famous Dave's Rich and Sassy sauce has a special place in our fridge at ALL times.  It's the go-to barbecue sauce for us.  Use whatever sauce you prefer!

Chicken: Ok, roasted chicken was on sale at our local grocery for $5 per bird.  I could have roasted my own but, again time is lacking!  I used exactly one chicken breast for two pizzas (the other one was used for chicken enchiladas the next day).

Add Ons: Usually I add onions and/or bell peppers, but I forgot since I was so obsessed with these Hot Pickled Garlic cloves from Jellybean and Julia's, a local company and friend-owned.  She cans such amazing things and combinations of things that it blows my mind.

Cheese:  I used a whole package (8 oz) of shredded mozzarella on each pizza.


I use my Pampered Chef pizza stone (so worth the monies!) and bake the crust for a few minutes... Not so much to make it super brown, but to get it going.  That way you'll get a nice crust on the bottom and it won't be soggy! 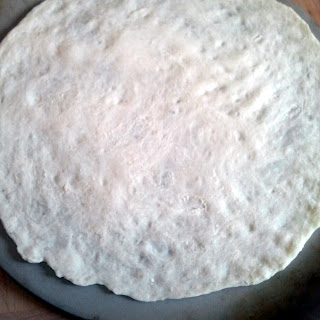 Then I add about two heaping spoonfuls of barbecue sauce.  Joe does NOT like saucy pizza and I'm definitely the same when it comes to BBQ sauce on pizza. 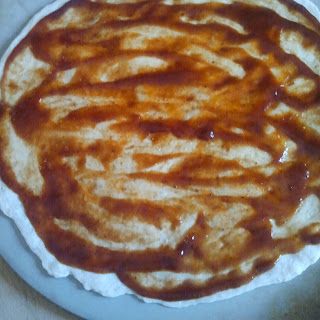 I added half the chicken, a whole chopped clove of the garlic and covered it all in mozzarella cheese. 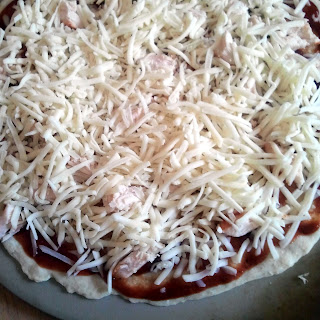 I really don't set a time since each pizza is unique, but I wait until it's nice bubbly brown in the middle. 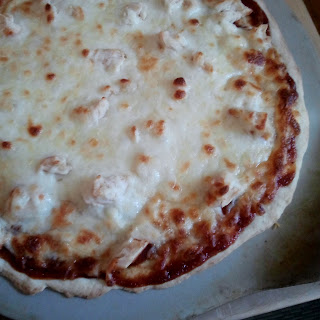 The first pizza was delicious...  But I added even more of the garlic (two cloves) to the second one!  There was just something so extra yummy about the little pop of extra flavor of it to go along with the spice of the barbecue sauce and chunks of chicken.

Overall, it took nearly no time to make a wonderful pizza from my own over for less than $7.  Actually make that, 2 pizzas for $7.  And that's just a guess on price... I probably bought the sauce on sale and I know I did the cheese.  :D


There is one recipe... One of my favorites.  I'll be sharing more in the future!

P.S. Yes, the other chicken breast went to dinner tonight, but I won't waste ANY of the rest of it either. That'll make soup or stock or chili...  I hate wasting good food!

Next recipe - Bagel Bread with photos of a sandwich I made with two local ingredients!